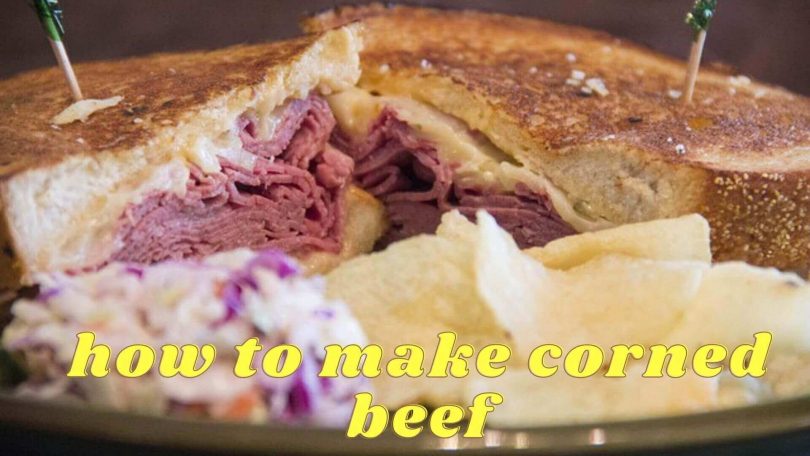 Corned beef is specifically beef cured with salt brine, and other selected spices for added flavor. It gets its name from “corn” from an old English word for grain, or pieces of solid things about the size of grains, such as salt.

You may be surprised at how easy it is to make homemade beef. All you need is some time – about a week to brine and in the afternoon to cook almost no work in between. A brisket is enough for family dinners and also leftovers to cut into thinly slice for sandwiches the next day.

This recipe requires pink salt, a curing salt with nitrite added to it. It gives the corned beef its color and taste. Pink salt is not necessary to use, so if you choose not to use it due to the nitrates, be aware that the final corned beef identified will still be juicy but gray, not the most common red color.

What is the best cut of beef brisket?

It all starts with picking the beef brisket. There are a lot of cuts so be careful. I prefer the whole brisket with both points (thick end with a thin layer of fat) and a flat cut, while it is flat and probably the most widely used in pre-packed ones is leaner.

Ingredients of your choice

Have you ever wondered how the corned beef is made or do you want to make your own homemade version instead of the pre-packaged ones. It’s easier than you think!

What you need is just patience and keep the beef brisket in the fridge in pickling brine for 10 days. it only just takes five days to cure.

Here’s what to do:

2) Combine the ingredients with refined water. Stir until they dissolve.

3) Take the meat and remove as much fat as possible unless you plan to use it for pastrami. If so, leave a layer of 1/8 “on the other side. Because the beef is cooked in boiling water, the fat becomes gummy and unappetizing. But if you plan to make a pastrami with it, you will be smoking meat.

4) Add the meat to the curing solution. It can float, so place a plastic container filled with brine over the meat until it submerges. The meat will drink up the brine so make sure there is enough to cover it for at least 1 “otherwise you will get the meat high and dry after a few days. Refrigerate. Move the meat daily or so just to stir up the cure. When you are done, the exterior of the meat will be brown or gray and when you cut it, it should not look very different from the usual raw meat, just a little pinker.

How to season your corned beef

There are so many corned beef brisket that taste are all the same but the one i cured is wonderful and different depends on which spice you use, you can make your own flavored beef.

The corned beef gets its pinkish-brown color through the use of sodium nitrite, a chemical that combines taste and helps prevent bacterial growth. Sodium nitrite is sold for the purpose of curing meat in a way called “pink salt.” Since sodium nitrite is toxic in sharp amounts, it is dyed pink so that we do not mix it up with table salt.

You can use pink salt in this recipe or not. I have corned beef with or without work. The curing salt adds more flavor and will help keep the beef better if you don’t cook it immediately after curing.

There is controversy over the use of sodium nitrite in the treatment of meat, as frequent use of cured meats (bacon, ham, pancetta, ground beef) is linked to an increased risk of certain types of cancer

To achieve a pink color without the use of curing salt, some people add a beetroot or two to boiling water when it comes time to cook the roast. I haven’t tried that yet, but if you do, please let us know how it works!