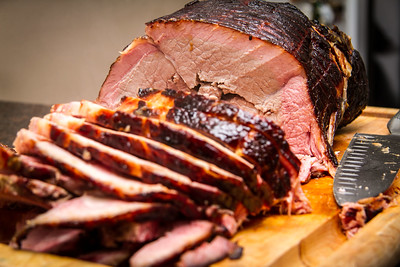 How to smoke the best ham ever

This is recipe for smoked ham is so awesome! You wouldn’t believe how good it is. let’s get to it.

If your ham reaches an internal temperature of 160 ° F, it is almost ready to serve. Before that, though, you need to coat it up with a delicious ham glaze, or maybe opt for a crunchy ham glaze.

However, the ham will need to be cooked in the oven just a little bit. The recommended internal temperature is 165 degrees. Remove the ham from the smoker when it reaches 160. Place in a foil lined baking pan.

My mouth is already watering for some of my special smoked ham. You wouldn’t believe how good it is – seriously! The interior is soft, tasty and watery, and the exterior is delicious. The smell is also amazing. The combination of aroma from pork, smoke, fruit juices, and ground cloves will have everyone drooling.

Which is the best ham for smoking?

“Ham” is the name given to a pig’s thigh and rear leg portion. In the United States, hams are commonly smoked, cured, or both. The treatment process includes nitrates and nitrites, salt, or sugar.

What to Look For

What is the best way to smoke Ham?

There are a few ways to smoke ham.

When cooking this dish, many chefs like to add more flavor. This can be done by marinating but the most common way is to add glaze or cover the meat. Glazes are usually natural and can be made with honey, molasses, jellies, jams, fruit juices, sugar, maple syrup, or brown sugar. Spices, butter and fruit juice are sometimes added. The most popular fruit drinks for this purpose are apple juice, cherry juice, orange juice and pineapple juice. Some chefs also like to use carbonated soft drills like colas.

How to smoke ham to make it taste smoky?

BBQ wood, also known as wood chips, is what gives the smoky flavor to the meat you will smoke, and your wood choices are many. Many people who smoke a lot have favorite wood flavors, sometimes with a different wood for each type of meat they cook. Such chefs may have tried several different types of wood to obtain their favorite smoking additives.

We have tried several types of BBQ wood with smoked ham, including oak, apple, peach and pecan. Pecan wood is my favorite wood is mild, and gives the meat a subtle flavor. It also gives off a delicious aroma. We don’t just use it with ham. It can also be used for chicken, turkey and pork ribs.

What Kinds of Wood Can I Smoke With, and How Does It Taste?

Different woods will taste different. Like I said, my favorite ham is pecan.

Some Tips Before You Get Started

Learning to smoke ham is not difficult, but it takes time. It takes many hours to smoke at low temperatures for the meat to cook all through. Fortunately, the smoking process does not require much tending, so you can do other things as the meat cooks. Although, you need to check it only once or twice during the process.

You can get a good smoked ham by simply placing the ham in the smoker, filling the water pan, and placing the BBQ wood in the burner. That’s for a good ham.

The cooking times for smoked hams vary, depending on a few factors. We have smoked hams on the smoker anywhere from eight hours to more than twelve hours. Remember: the internal temperature of your meat is what matters.

I urge you to try this recipe once. Read this article carefully and follow all the tips and advice on how to smoke the best ham ever.